Our blog is almost one year old! And what better way to celebrate than to grow our family of contributors and spread even more Brownie Points love! Last week we heard from NPO and Corporate co-ordinator Malcolm Boyd, today we’re super excited to introduce Sasha Fairhead, our very first Brownie Points volunteer ambassador. In this post she inspires us to leave-no-trace by writing about the recent successful Lions Head Clean-up that took place on 25 February.

With her impeccable views, Lion’s Head is one of Cape Town’s top attractions for tourists and locals alike. It’s inspiring to see so many people on the mountain, embracing the outdoors, but an unfortunate reality is that a handful of these hikers have no respect for the environment, leaving a trail of litter where only footsteps should be left.

To address this, Love Our Trails, a local NGO that aims to educate people and preserve our mountains, organised a Lion’s Head clean-up on a bright and sunny Sunday morning. A fantastic turnout of about 70 people, donned with gloves and rubbish bags, led up the mountain. This great turnout was a clear indication that Capetonians care about their environment and want to collaboratively help to conserve it.

If NGOs and the community work together – a real difference can be made.

One doesn’t realise the sheer amount of graffiti and litter scattered around the mountains until you open your eyes and look. There are no rubbish bins on Lion’s Head as authorities want people to take responsibility and bring their litter back down. However, at the car park located beneath the mountain, is where most of the litter accumulates –  around the bins. Well, because it makes more sense to throw something away in a bush next to the bin, than in it, doesn’t it?

As we walked up the mountain, we were shocked to see the amount of rubbish thrown in the bushes next to the path; bottles, tissue, cigarette butts, and many unidentified objects. As someone who cares so deeply about the environment, it was heart-breaking to see how careless people have become.

Each person’s “one small piece of litter” soon accumulates into its own unsightly mountain.

Frustratingly, I saw a man cleaning graffiti off a rock at the top while a little boy stood writing his name on the other side. To preserve our environment it’s important to educate people like that young boy to write their names on paper and not on mountain sides.

There were more than 60 bags of litter collected on Lion’s Head alone.

This one clean-up made a monumental difference in preserving the surrounding environment and making Lion’s Head enjoyable for all hikers. Make sure to throw your own litter away or pick up others off the floor. Every little bit helps.

Ready to join the growing ranks of South Africa’s epic volunteers, making a real difference in their cities? Sign up for Brownie Points to take part in our future events. And stoke your gees with more of our posts on volunteering. 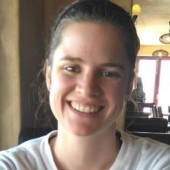 Having lived on three continents, Sasha has gained international exposure through active volunteer and part-time work, whilst studying towards a degree at UCT in geography and anthropology.